Ceasefire in Syria: Another Facade

The United States and its Zionist lackeys continue to play dirty political games and wreak havoc in Syria. Behind head-chopping mercenaries – al-Nusra, Daesh, ISIS, ISIL, Blackwater, al-Qaeda, whatever we want to call them – is American-Zionist weaponry and funding. Despite their mischief, the American-Zionist alliance has been unsuccessful. Russia, along with Hezbollah fighters, have and continue to inflict heavy losses on the American-backed mercenaries fighting in Syria. The subsequent reaction from the United States and its European allies is revealing: by openly voicing their displeasure at Russian airstrikes on Daesh (ISIS) targets, it is clear that the barbaric militants – who have no ethical qualms in executing and mutilating the bodies of Syrian civilians – are protecting American and European interests, which are far from democratic. After failing miserably to topple a sovereign, legitimate, and popular Syrian government by paying mercenaries to pillage the country and slaughter innocent men, women and children, they have resorted to strategies that have, in the past, proven to be a façade.

Since it began bombing the terrorists in Syria, Russia has become the direct target of American criticism. In fact, the United States has seized every opportunity to publicly demonize and denounce the Russian government in the international arena. The irony, however, is that Vladimir Putin has openly declared that his administration is conducting an aerial campaign in Syria, that it is with the permission of the Assad government, and that Russia’s military operations in the country are aimed at containing a rapidly escalating, American-instigated conflict, which has so far claimed over 250,000 innocent civilian lives. In contrast, the United States, by interfering in Syria, by paying and arming mercenaries to wreak havoc, and by disregarding established laws of sovereignty, is breaking international law. In any case, the United States campaign against Russia has not worked. In fact, the White House, in stark contrast to its actions, was forced to strike a conciliatory tone regarding Russia’s involvement in the Syrian conflict:

“In particular, President Obama emphasized the importance now of Russia playing a constructive role by ceasing its air campaign against moderate opposition forces in Syria.”

The statement, apart from being a perfect example of United States’ duplicity, leads us to another question. Who do the Americans regard as “moderate opposition forces”? Are they, by any chance, the barbarian hordes trying to take over Syrian cities with American-made weapons? 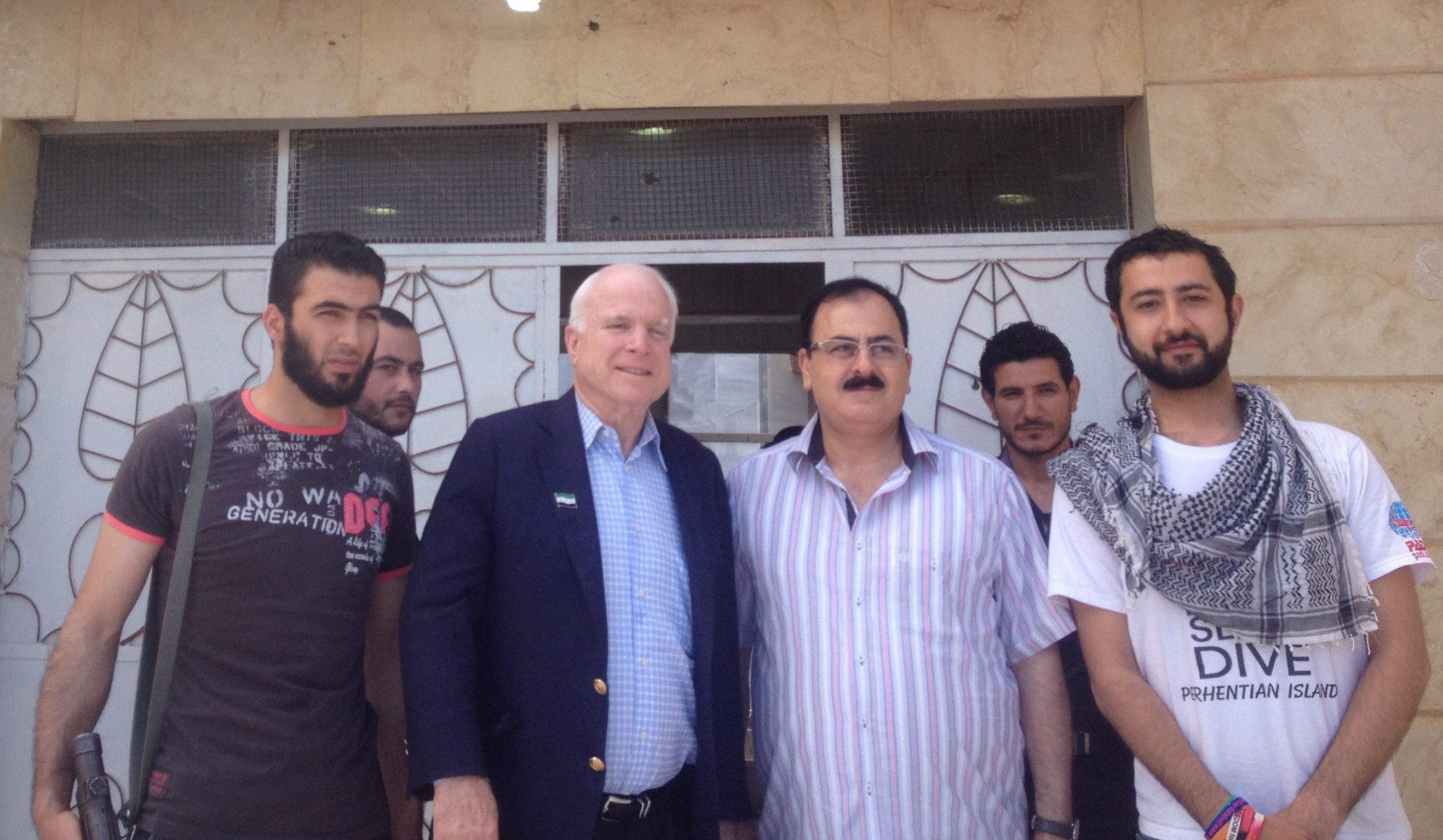 John McCain visited rebels in Syria on Monday, his communications director confirmed to CNN, making the Arizona Republican the highest ranking elected official from the United States to visit the war-torn country since its civil war began over two years ago.

Are they the people who behead and crucify civilians, who kidnap women and children and force them into sexual slavery? Are they the forces who, after killing Syrian soldiers, tear out and chew on their hearts? The statement from the White House clearly shows that these same militants, who do not distinguish soldiers from civilians, are being supported by Western countries with expansionist, imperialist agendas. In addition to supporting the “moderate opposition”, Western countries such as France have been illegally bombing Syrian oil installation areas. On one hand, the United States is flooding Syria with militants. On the other hand France is bombing Syrian resources. The intention is clear: the West is not trying to overthrow the legitimate Syrian government; it is trying to destroy Syria.

In the midst of all this chaos, the United States is seeking to play another trick. Seeing that putting pressure on Russia is not working, that its mercenaries are being destroyed by Hezbollah fighters, that their air strikes to protect the militants are ineffective, the United States has now resorted to calling for a “ceasefire”. Russia and the United States have agreed to enforce a ceasefire in the country starting from February 27th. This should not be mistaken as an intention to stop the violence, but as another attempt to inflict damage on the Syrian establishment and those aiding it. In actual fact, there are multiple reasons for the Americans’ call for ceasefire. First, to fly tired terrorists out of Syria and replace them with new ones, an operation that requires coordination between Turkey, the United States and Saudi Arabia. Second, as it has been proven in the past that United States and its allies do not honor their promises, which leads us to believe that ceasefire is actually another military tactic. The ceasefire will definitely not be honored by the militants; they will start attacking Syrian soldiers and civilians. Of course, the Syrian Army will not let its guard down. As has been the case since the beginning of the Syrian conflict, the most vulnerable are Syrian men, women, and children. The American-funded mercenaries will not stop targeting them.

The situation in Syria is turning from bad to worse. The international community is a culpable for its silence, for sitting idly whilst a country burns and its people are slaughtered. Furthermore, the Turkish government and the Saudi regime have both announced their intentions to deploy ground troops in Syria, despite strong condemnation from the Syrian government. As has been mentioned in my previous analysis, the stage is being set for a major war in Syria – which will occur sooner or later. We might very well be witnessing the first stages of a major international catastrophe in Syria and the region.