Corporatocracy is a term used to refer to an economic and political system controlled by corporations and/or corporate interests. Society today is well and truly a corporatocracy; claims that we are still living under a democratic society are false. As owners of the means of production, the Capitalists have wrapped the governments and the working class into a web of forced dependency; that is, we are forced to depend on a group of unelected people who are vile, corrupt and have no sense of human compassion or morality.

We the working class, the proletariats are being openly exploited. All our basic needs, our commodities are owned by the elite. Therefore, as the owners of the means of production they are in full authority to make decisions that affect us greatly – decisions such as hiring, firing, choosing where to invest etc. They have the power and the backing of fortunes to lift their industries without thinking twice about the effect it will have on the economy of the country and the increasingly impoverished masses they are leaving behind. Why? Because the only thing that is of interest to them is one word: profit. If anything and anyone gets in their way of achieving this golden goal, then these inherently corrupt corporations will do anything and everything to eliminate them from their battlefield.

A clear example can be seen when looking at the major oil corporation, Halliburton. Evidence has shown that Dick Cheney, the former Vice President of the United States during the second Bush administration, constructed the horrific 9/11 attacks as a pretext for the United States to invade Afghanistan and Iraq, which it did.

The invasions multiplied Halliburton’s profits, the enormous military contractor where Dick Cheney himself had once been CEO. In other words, those responsible for the butchery and pillage of Afghanistan and Iraq used war to make money!

How and why was Halliburton able to achieve this? They used its puppets in the government. 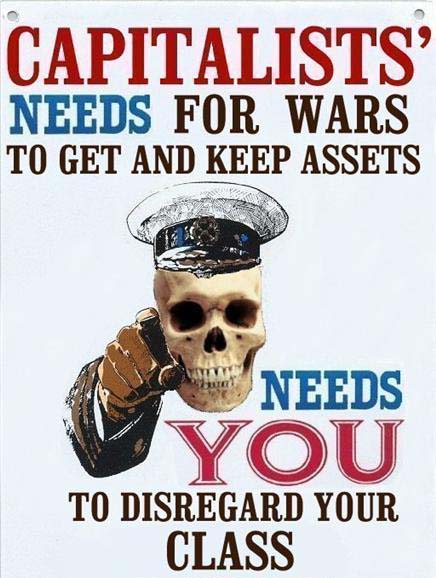 As these corporations grow larger, they develop the ability to direct both national and international policy in a manner that benefits them and suits their interests, whatever those interests may be. They completely ignore the fact that in their pursuit of power and profit, they will be placing the lives, homes and futures of innocent people at risk. In the case of Halliburton, the victims were the Afghan and Iraqi people. How long are we going to sit idle, and let ourselves be treated as dispensable pawns in a sadistic chess game between monsters?

People ask, why are the crimes of these corporations not exposed on broadcasting news channels and papers? The answer traces back to the fact that the media is composed of corporations, which are primarily motivated by profit. In other words, corporations have also taken control over the media, the main tool that influences, informs and educates the masses. A large percentage of the world’s media industries are owned by one the world’s most ruthless capitalists: Rupert Murdoch, who is worth over 9 billion dollars [Allen, Kieran. Marx and the Alternative to Capitalism, (Lulu Press Inc, 2014)]. At the National Conference for Media Reform in Denver, journalist Amy Goodman summed up the role of corporate media in a single sentence: “This [corporate media] is no longer a mainstream media; it’s an extreme media beating the drums for war”. Why would the media promote war? Simply put, according to their twisted, immoral worldview, it’s the best way to gain profit and eliminate potential competitors in the market. MSNBC host Phil Donahue once made the grave ‘mistake’ of meddling with the capitalist-constructed media narrative and getting in the way of their profit-making pursuits by voicing anti-war sentiments in the lead-up to the war on Iraq . Phil Donahue was subsequently fired from the network. This incident is but one example that illustrates how the mainstream media, rather than challenging the status quo, supports it.

In such a society public policy is created not to advance the general well-being of the masses, but to protect, enhance, and create profit opportunities for hegemonic corporations that collectively manage $23.91 trillion in funds. However, because these satanic corporations feed off the capitalist society, we can only topple their empire by ‘eliminating’ the capitalist system.

If the working class unite – in the words of Karl Marx, if they gain “class consciousness” – success can be achieved.

A current and successful example is of the BDS movement (Boycott, Divestment and Sanctions), a movement that encourages society to boycott companies that support Apartheid Israel. In the beginning, people doubted the effectiveness of the movement, wondering whether boycotting Coca Cola was going to do anything. However, when people united against the Apartheid, Zionist regime illegally occupying Palestine, the movement was able to finally cause the occupation to become a costly stand for Israel. An Israeli financial newspaper covered a leaked government report estimating that if the BDS trends continue, it could cost the illegitimate entity’s economy $1.4bn a year. With this success in mind, lets pledge to be more “class conscious” and be aware of who is REALLY controlling us. While the banks and the cooperation’s have one simple plan – to create a society that serves them – let’s make it our plan to create a society that not only challenges their existence, but eliminates them completely.

Kinza Abbas is a student at The University of Melbourne in Australia. She is completing a Bachelor of Arts degree majoring in Politics and International Studies - Media & Communications. She specializes in current events, political and economical ideologies.